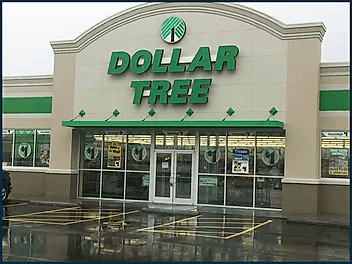 Dollar Tree, Inc. is an American chain of discount variety stores that sells items for $1 or less. Headquartered in Chesapeake, Virginia, it is a member company of Fortune 500 and operates 13,600 stores throughout the 48 contiguous U.S. states and Canada. Its stores are supported by a nationwide logistics network of eleven distribution centers. The company operates one-dollar stores under the names of Dollar Tree and Dollar Bills. The company also operates multi-price-point variety chains under the names Deals and Family Dollar.

Dollar Tree competes in the dollar store and low-end retail markets. Each Dollar Tree stocks a variety of products including national, regional, and private-label brands.

Dollar Tree took possession of the building under a temporary occupancy permit in February of 2018 and commenced paying rent on April 2, 2018. The final construction punchlist is being completed by the developer and final occupancy is expected in May. The lease is structured as modified triple-net, with the tenant responsible for CAM, Taxes, and Insurance and the Landlord responsible for the roof and structural components of the building.

The property is positioned ideally in the main retail thoroughfare in Jerseyville, as a Wal-Mart Supercenter outparcel. There is a brand-new Taco Bell being built on the pad site next door to this building, illustrating the continuous growth of this corridor and market as a whole.

In March of 2018 Jerseyville announced a partnership with Kansas City Southern to construct an extensive inter-modal hub. The $500 million dollar project is estimated to bring 1,000 jobs to the local economy immediately.  See Here

The St. Louis metro encompasses the city of St. Louis; the Missouri counties of St. Charles, Jefferson, Franklin, St. Louis, Lincoln, Warren and Washington; and the Illinois counties of Madison, St. Clair, Macoupin, Clinton, Monroe, Jersey, Bond and Calhoun. The metro is near the geographic center of the United States, within 500 miles of one-third of the U.S. population, and has more than 2.8 million residents. St. Louis is the most populous county with 1 million people. The city of St. Louis, which is located at the confluence of the Mississippi and Missouri rivers, is the only city in the metro with a population of more than 300,000 citizens.

The central U.S. location and Mississippi River accessibility allow for fast access to markets both domestically and internationally.

The Kansas City Southern rail line runs from Mexico to just south of Chicago. It travels through the rural farmlands in the eastern limits of Jerseyville. Historically International freight would travel north on this line and transfer to another rail line and be off loaded in Chicago for distribution. Under a deal just reached with Kansas City Southern, Jerseyville City and a developer a major facility will be constructed here where freight is offloaded to trucks and distributed to surrounding states.

Home prices are well below other large markets in Midwestern states and the U.S. overall.

People of Hispanic origin make up 1.67% of the current year population in your selected area. Compare this to the US average of 17.65%.

The Latest From Our Blog

They loved our services.

Nolan Merritt
15:19 15 Apr 21
Everyone at Millcreek I spoke with was very helpful in understanding the different investment opportunities. I enjoyed working with this group.

Vishwa Khanna
19:52 08 Feb 21
It was an excellent experience to invest with experienced & knowledgeableprofessionals at Millcreek Commercial! They go out of the way to explain & educate prospects for the ultimate customer satisfaction based on client's needs & risk-tolerance for continued excellence in performance & safety of funds with the peace of mind!Thank you Millcreek Team!Best Wishes,Vishwa Khanna

BC Walker
21:33 04 Feb 21
Millcreek delivers a model that fits what I need perfectly. I've been looking for a way to self-direct my IRA into commercial real estate and have found it here. They do the heavy lifting--exactly what I need.

Join over 100,000 people who received bi-weekly emails about the benefits of investing in commercial real estate.